Between August 3 and 26, 2018, 11 bars and restaurants of the Historic Center of Old Havana will put to your consideration a tapa of their creation, always accompanied by a glass of Casillero del Diablo wine.

The participants who follow the Route will be able to taste exclusive preparations, designed to highlight the values of the Cuban culinary culture. At the same time they will be able to know and appreciate the richness that the gastronomy of that area of our capital has amassed in recent years.

The combination of a tapa and a glass of wine (in a volume not lower than 125 ml), will have a fixed price of $ 3.00 CUC. No extra amount will be charged for the service.

Those who participate and consume at least 8 tapas of the 11 in competition, will enter a raffle that offers 3 first prizes, 3 second prizes and 24 third.

Who can participate? All persons of legal age may participate without distinction or discrimination of any kind for reasons of sexual orientation or gender identity, racial, religious, cultural, political or economic nature or due to national or regional origin.

NOTE: By participating in this event, you agree with its Terms y conditions.

The purpose of the Route is to reward the best tapas in the three categories in contest: Presentation, Taste and Originality. The winners will be defined by ALAMESA based on the evaluations given by the participants on their ballots. 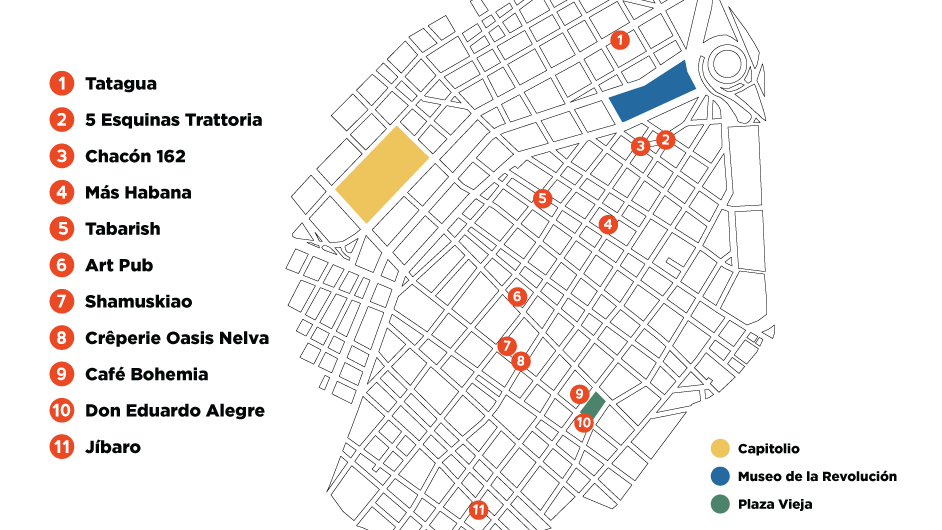 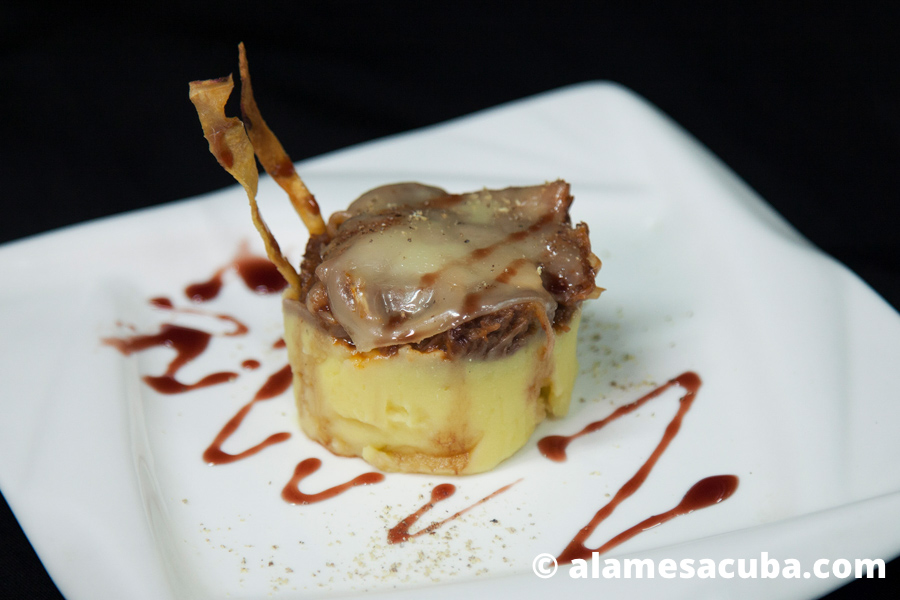 Lamb Ropa Vieja on a sweet potato base made with butter and evaporated milk. Decorated with a reduction of red wine, balsamic vinegar, honey and crunchy sweet potatoes, powdered with fresh black pepper. Cover with a sheet of gouda cheese. 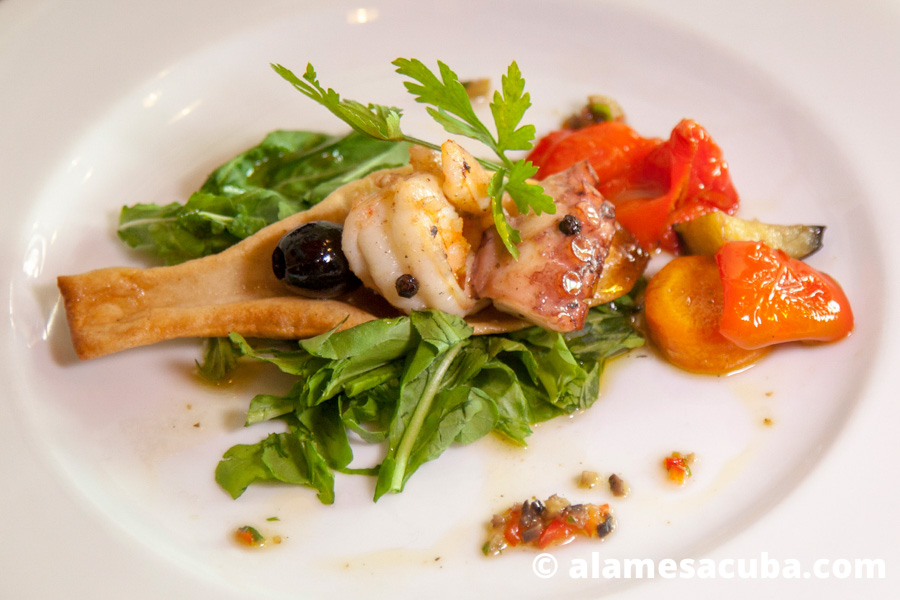 Marinated seafood with vegetables mounted on a focaccia with fine herbs. 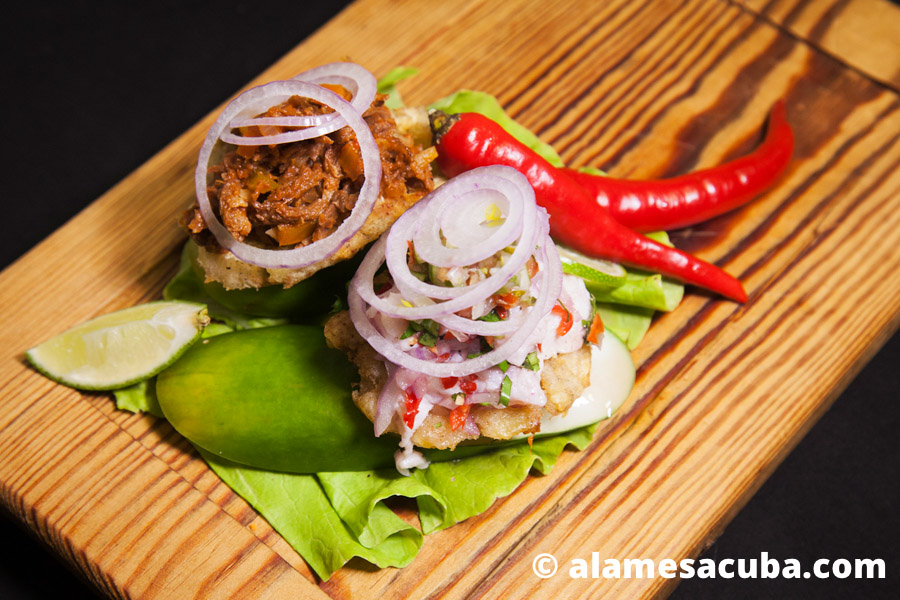 Two tostones, one with ceviche and pico de gallo and the other with beef Ropa Vieja. 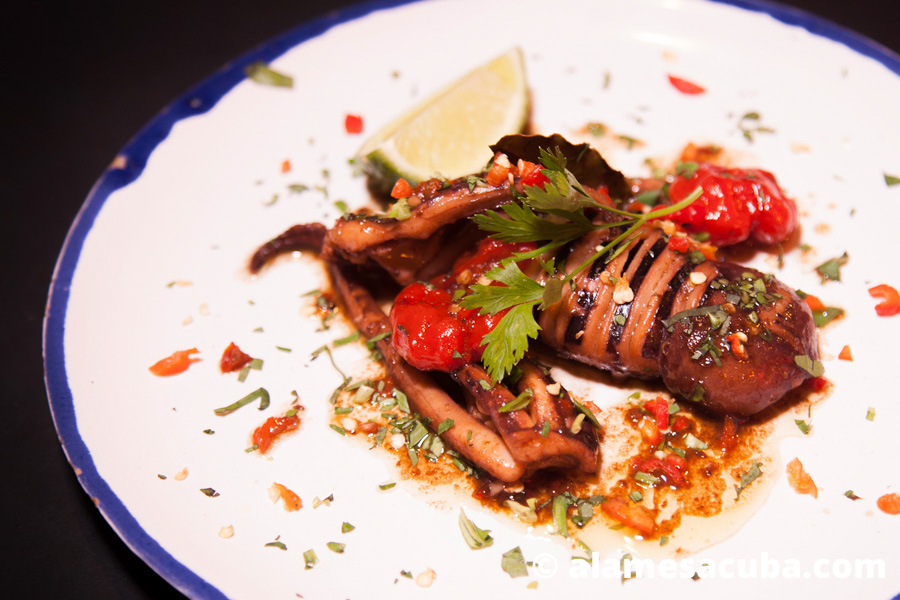 Squid prepared with star ingredients of Cuban cuisine: ají cachucha and dry wine. The tapa is named after the latter (asks in Más Havana why). 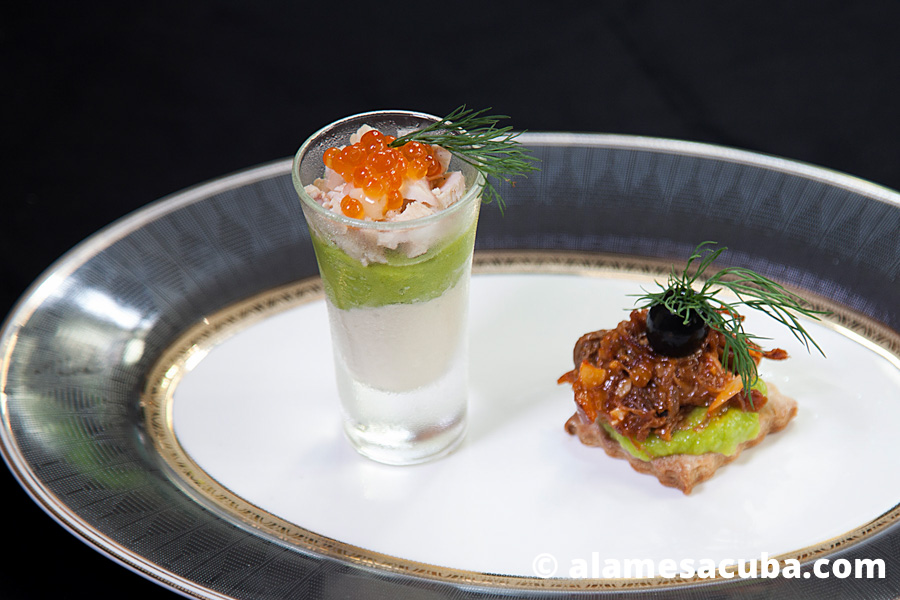 Chupito with Smetana, guacamole, pickle and caviar, accompanied by a cookie of broken dough with guacamole, Ropa Vieja and black olives. 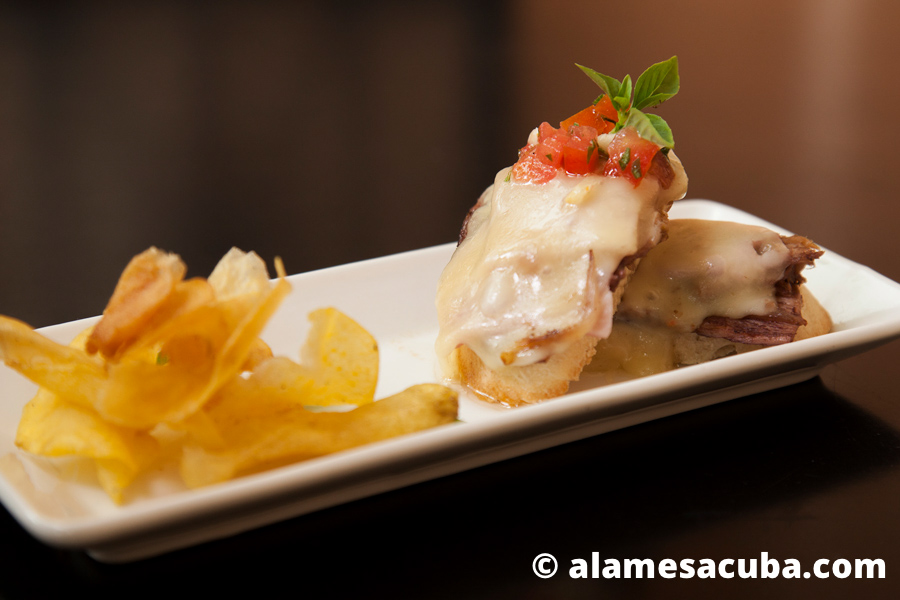 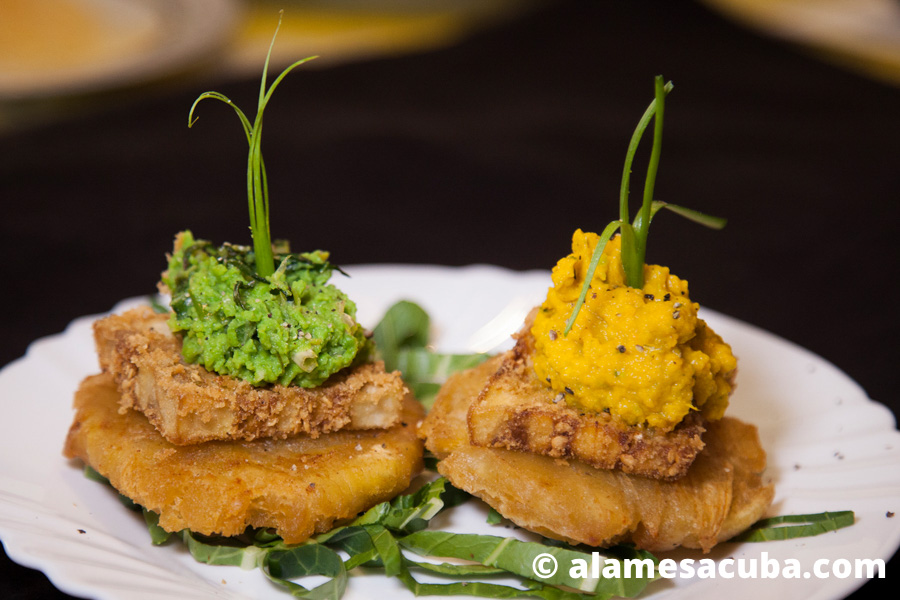 Two tostones with breaded eggplant, one accompanied by a cream of pumpkin and carrots and the other by a green peas cream. 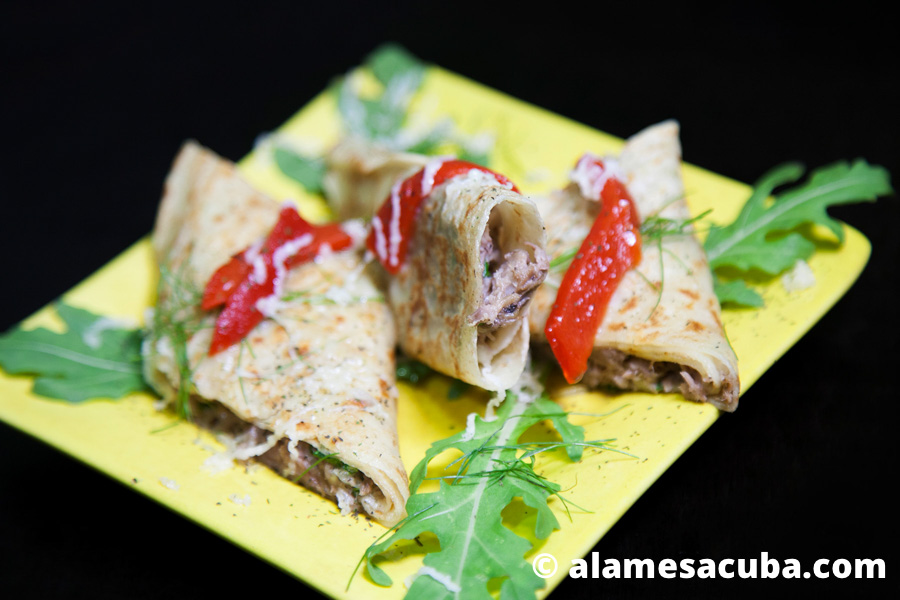 Blend the flavor of the crepes with the Cuban flavors of braised pork, arugula, pineapple and a secret ingredient that you will love to discover. 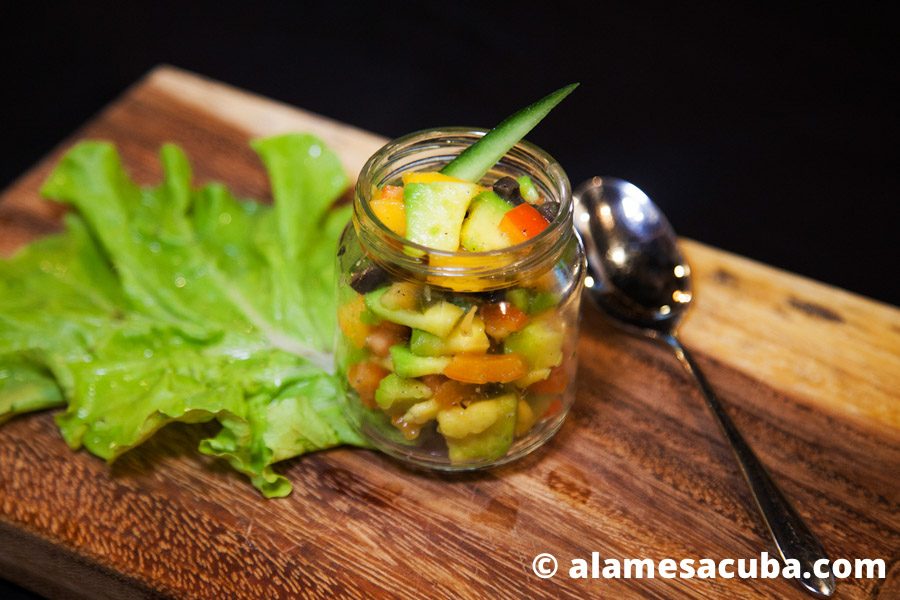 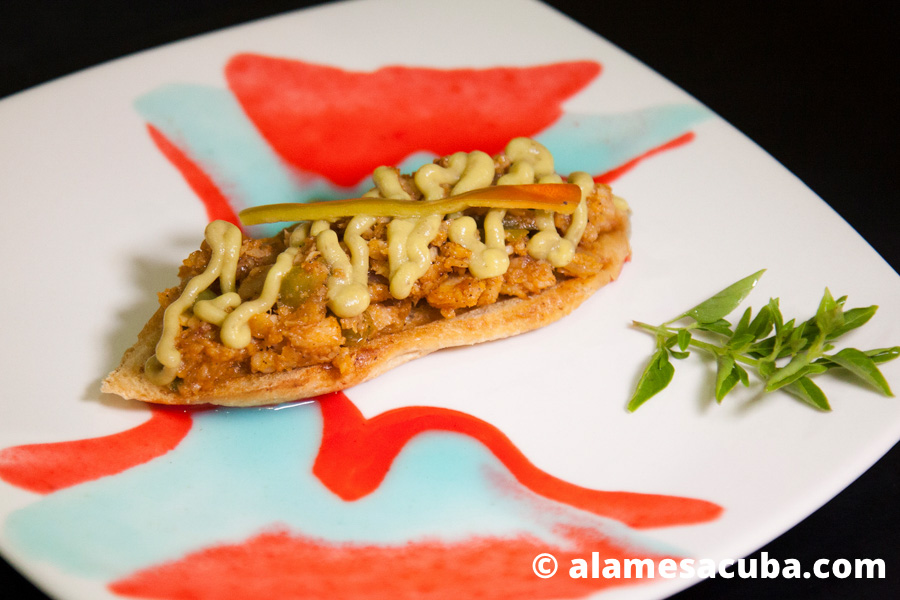 Bruschetta with fish enchilada covered with a mirror of guacamole sauce decorated with a cherry of pickled pepper. 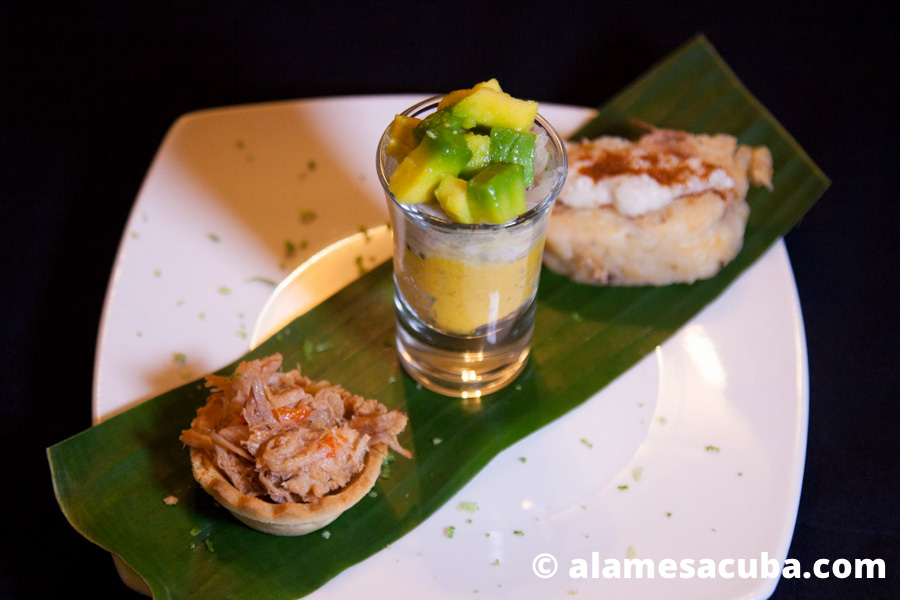 Traditional bacán of the Eastern zone of Cuba, a basket with meat and vegetables typical of the western zone and a shot made up of a fish crude accompanied by cream of sweet potato and avocado dices.